Stomachs get tied in knots every time the thought comes up: Will there be a 2020 NFL season? Doubt is in the minds of many as the season looms closer and more NFL events continue to get cancelled. It’s not just the NFL causing doubt however, it's also other sports intending to start up before the NFL, but are struggling to successfully do so; Players are dropping out of the NBA playoffs, MLB is having difficulties agreeing to players and their pay, MLS’s FC Dallas was removed from the season starting tournament because too many players contracted COVID. The concern for the NFL season is real and it could just be beginning.

We all want to play football. We also have an obligation to our families .. family comes first so to say “ We taking some of your money and we don’t have the answers to whether you’re going to be safe” comes off as disrespectful to most .. it’s “take and take”.where is the give?

As of right now, the NFL is still planning to stay the course with two preseason games and a full season starting on time even with some of the players fighting back. Analysts and fans are excited for the start, who have been deprived of the normal offseason entertainment the NFL provides, however it raises questions, the main one being: What can we expect? I look back to the lockout of the 2011 offseason which started on March 11 for the answers.

In 2010 the owners opted out of the CBA agreement, causing the NFL to play the 2010 season without a salary cap. This started a clock on setting up the agreement with time expiring  on March 11, 2011. When the NFLPA and the owners couldn’t come to an agreement, the lockout ensued.

What the lockout meant

During this time the players were completely barred from practicing or using the facilities to stay in shape. They could still practice at other locations as a team, but coaches could not be in contact with those players. Developing new schemes and plays was thus a tall task. The biggest effect the lockout had in terms of a team’s offseason progression was in free agency and with rookies.

Free agency opens up about a month prior to the draft. It allows teams with multiple holes on their team to fill them so, in theory, teams can draft the best available player. In 2011 they weren’t able to even re-sign most of their players because teams were barred from communication. It made general managers’ job extremely difficult not knowing which players they would be able to bring back and which holes to fill. The Chiefs, for example, had 25 unsigned contracts looming in the twilight zone.

The 2011 NFL Draft still occurred, but as soon as a rookie was drafted they automatically became locked out as well. The good news for those rookies: they knew what team they were joining. Undrafted rookies suffered the most as they weren’t able to be picked up by teams until after the lockout. Most of those players were thus eliminated from joining player organized team workouts.

It made it extremely difficult for teams to effectively piece together rosters and get the entire team on the same page in a limited time frame. Free agents were being signed as training camp was going on. Rookies and newcomers needed to learn the playbook. It was a lot for coaches and general managers to handle before the start of the season. With everything happening, they still successfully launched the season on time and only had to cancel the Hall of Fame Game.

Teams, as a whole, have it much easier now than they did with the lockout. They are fighting the issues together instead of against each other. Players spend hours each day preparing for the season through video conferencing and coaching. Although frowned upon by the NFLPA, they can also organize workouts and practices in small groups. Rookies are getting coached up on schemes and most are able to go through previous year’s film to see where they would fit in. Undrafted free agents were able to sign with teams and teams didn’t have to wait on free agency. Players with existing injuries were able to report to the facilities to continue rehab. All in all, 2020 is far better off in terms of being prepared for a season.

There is the issue of actually practicing and getting on the field to get adjusted to the new schemes, however. The NFL is aiming for late July to reopen team facilities, which gives players roughly 30 days to learn how to properly execute the system and get in “football shape”. The question remains: Who’s going to be affected the most by this lockout?

The recent urge to write this article was created when I came across the running backs from the 2011 draft class. There wasn’t a single rookie running back with over 1,000 yards rushing, which has only happened two times since 1992. Looking into Cowboys running back Demarco Murray’s production, I saw on PFR he struggled to see the field until Week 7 (when starting running back Felix Jones left with an injury). He destroyed defenses over the next six weeks while averaging 126.8 yards per game before getting slowed by injuries.

The initial thought was it just took Murray time to learn the plays and the offense. It drove me to look at the quarterback and wide receivers, and they didn’t struggle like the running backs. In fact, then Carolina Panthers quarterback Cam Newton had one of the greatest rookie seasons of all time. Maybe I was wrong. Maybe the defenses were the ones struggling. So researching big plays and average depth of target, I found it really wasn’t too different from any other year.

I decided to glance into the offensive line, one of the hardest positions to play without getting reps. They have to know who they’re supposed to block at what time, when to shift to the next guy, and what the running back or quarterbacks options are at each second they’re trying to shift a 300-pound man whose sole focus is to get past them. They also have to be aware of every defensive position and what the defenders are doing so if they need to shift to a different opponent they can be in unison with the rest of the offensive line. Their ability to make quick, accurate decisions is why the two highest-scoring positions on average for the Wonderlic test are offensive linemen and tight end. Blocking schemes are one of the most intricate yet complex schemes in all of football which is why they need to be practiced time and time again.

There were 46 offensive linemen drafted in 2011. Ten of those teams started at least one rookie offensive lineman. Of those ten teams, only three saw an increase in sack percentage from Weeks 1 through 4. Maybe the offseason isn’t as important as we were led to believe.

I felt defeated at this point. Before I started this research I thought I was going to crack open a gold mine of information when it came to not having an offseason. When you looked back at the stats it was as if the 2011 lockout never occurred. With no effect, why wouldn’t the NFLPA fight to eliminate the offseason? There has to be some evidence showing teams were affected. Even teams' records with new coaches looked above average. Then I came across one major golden nugget. The injuries.

The amount of injuries produced only 17 quarterbacks who played at least 15 games, tied for the least amount since 2011. In addition, the NFL had almost 300 more adjusted games missed by players than in 2010. Conditioning was an issue as we saw numerous season-ending injuries. 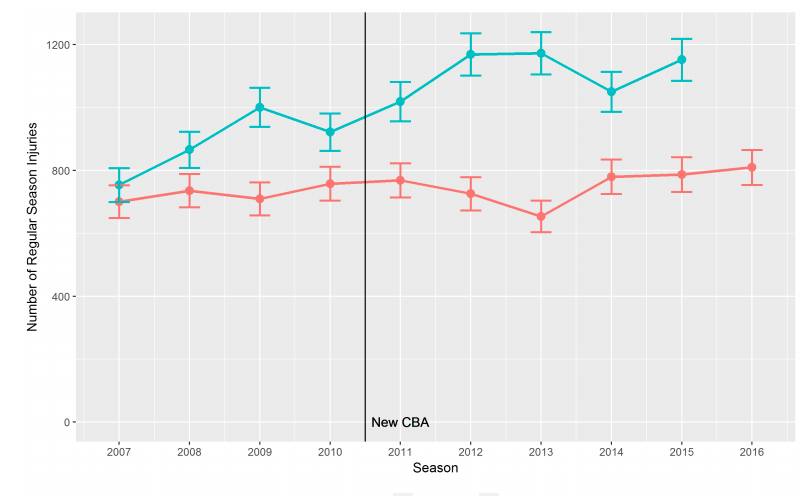 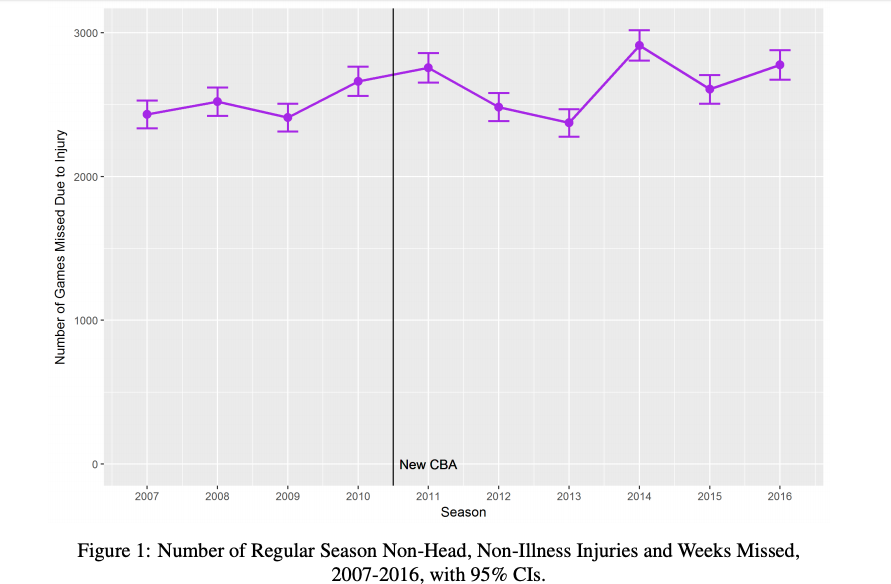 Health experts consider a conditioning injury preventable by stretching and training. Injuries such as Achilles tears - of which 12 occurred by Week 2 of the 2011 preseason - and hamstring issues fall into this category. Injuries such as broken bones and abdominal issues. Then you have the unknown injuries, where they don’t know if conditioning would help, consist of ankle and knee sprains- non-ACL. Concussions and head injuries were not included in this study.

The non-conditioning related injuries and unknown injuries remained relatively unchanged, however the conditioning injuries spiked to almost 50 more individual injuries than any other season from 2007 to 2016. Is this an insight at what's to come?

At first, I wondered if this was just an outlier year. However, looking at the CBA agreement signed in 2011, they restricted a lot of training regimens used to get players ready. They really started to crack down on teams, making sure they follow the rules set forth. Coaches weren’t happy with this and in turn, tried to get away with doing more than they were supposed to. We watched Pete Carroll and the Seahawks get punished for violating the rules.

The lack of offseason time gave us a bigger sample size to put the narrative of 2011 being an outlier year to rest. 2011 saw the most amount of individual conditioning injuries with 271, a 38% increase from 2010 since 2007. However, this increase was just setting the bar for future injuries with the new CBA. 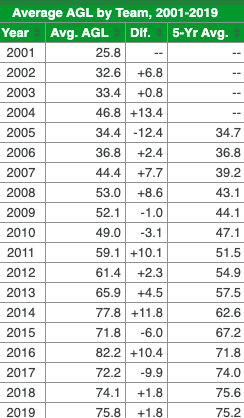 Adjusted games lost per team or AGL, measures the games not played by injured players. The highest number of AGL from 2001 to 2010 was 53. In 2011 we saw a 10.1 game increase from 49 to 51.1. 2011 has now been the least amount we have seen since. The amount of injuries continues to pile up with last year being 75.8. Could we see another spike with even less offseason time this year and no preseason?

We don’t know if the lack of an offseason will have the same effect on players as it did in 2011. Training regimens, health practices, and technology have come a long way from where they were almost 10 years ago. There is a case to be made however, for those players rehabbing at their teams facilities. They have been surrounded by the medical and training staff while being the sole focus. Those staff members don't have to worry about distractions of the other players getting hurt in camp or staff meetings. They have one job: Get their players who were hurt last year healthy and back on the field.

2020 might be the year to chase those rehabbing players who have had injury concerns in the past.